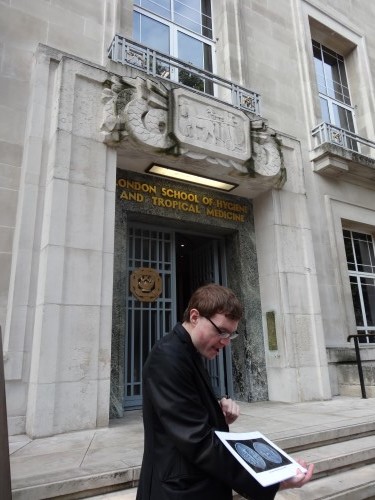 I think for many people (myself included) Art Deco is an architectural style associated more with American cities than with London. Yet, look around just a little bit and you'll find Art Deco buildings popping up all over the place, including several dozen Tube stations and London Underground's Headquarters at 55 Broadway.

However, it always helps to have a guide to show you the buildings and tell their stories. So it was great to go along on Yannick Pucci's Art Deco in Bloomsbury Walking Tour (Architecture in the Machine Age) because he has such an obviously passion for Art Deco architecture and history.

Unsurprisingly, given the tour's name, the focus is on Art Deco in Bloomsbury. I was already quite familiar with Bloomsbury before going on the tour and thought I knew a bit about Art Deco as well. Going on Yannick's tour demonstrated how much I'd been missing on both counts.

His tour is a wonderful combination of factual information, along with interesting anecdotes about the people who built, worked in and/or lived in the various buildings along the route. I was impressed with how much I learned about the architecture of the area in just over 2 hours.

Since tour guides generally like to protect their trade secrets, I won't reveal too much of what's included on the tour itself, you'll just have to go find out for yourself. However, I will say that if you have even the slightest interest in either Art Deco and/or Bloomsbury you should go on Yannick's tour. One of the best values in London at only £8 per person (or just £6.50 for students and seniors).

You can book his tours via Eventbrite here, follow his blog London Unravelled and follow on twiter @ypldn.

Here is just a small sample of what you may see along the way: This stunning former Daimler garage (now ad agency) is definitely not the model of a famous children's toy. The former ramps are now offices. Protest at the Brunswick Centre over the proposed Eyecatcher restaurant. Fire alarms at the Brunswick Centre Yannick in front of the School of Pharmacy One of the few non-Art Deco stops Senate House, one of London's most famous Art Deco buildings. Full Disclosure: Yannick offered to take me on the tour free of charge and we've previously worked together on my Bloomsbury Guide (in fact he provided the bulk of the local information). I think he's a fantastic guide and you should definitely go along to one of his next tours.