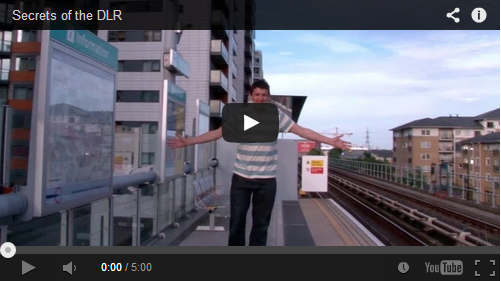 Not content to focus on just the tube, Geoff Marshall continues the wonderful secrets series with Secrets of the DLR. I especially like this video, not only because it focuses on the seldom discussed DLR, but also because I got to see it being filmed! (Any help I may have offered was minimal at best)

The video may only be 5 minutes long, but took over 5 hours to film. I don't want to ruin any of the magic but a lot of thought and effort goes into the editing process and several good bits had to be dropped to allow the whole thing to flow so well.

I won't spoil anything that's in the video, just watch it! However, as an added bonus here 5 photos I took on the day. Cool tower Spotted at that back entrance of Tower Gateway The Secret DLR Lift at Bank

For all the other videos in the series visit: