Well it seems walking tube lines is becoming ever more popular. The video above shows James Borrell and his girlfriend Jess walking the Victoria Line from Brixton to Walthamstow Central. Really brought back a lot of memories for me.

END_OF_DOCUMENT_TOKEN_TO_BE_REPLACED

The TFL video above looks at the Tube over the past 12 months during its 150th anniversary. It quickly whizzes you around the network in (bizarrely) one minute and 52 seconds. It includes several great timelapse shots as well snapshots of normal Londoners using the network.

Give it a watch to quickly relive the past year on the Tube.

With Tube 150 over, I figured interest in the London Underground would die down a little this year. I appear to be wrong. This is a result of the first episode of Sherlock series 3 heavily featuring the network as a central part of its plot.

Without spoiling it for the 7 people who haven't seen it yet, one of locations featured is a fictional ghost station. While the station mentioned in the episode never actually existed, there are dozens of real ghost stations, some of which you can visit to this day.

Here some maps with their former locations: Google Map and Beck Style Map.

However, if you'd like to learn a little more about these stations, including their individual histories and why they became abandoned or disused in the first place I highly recommend the following books:

Ben Pedroche's book is my favourite on the subject of ghost stations. Not only because he talks about the stations themselves, but because he provides walking routes for where to find them. Something I have some experience with.

Not convinced? I think this Amazon review sums it up nicely: "Got this book as a present for someone else but ended up keeping it for myself! Has lots of stuff about London I never knew, including places I've walked by every day for years and not noticed. I've done two of the walks and they were well informed with good directions. The best bit for me is the tube journeys section."

Looking for something a bit more factual? Well then London's Disused Underground Stations is the book for you. It has tons of great photos of many of the most best known ghost stations. In my opinion it's the most comprehensive book on the subject.

Sample review: "This book is an excellent source of information about the 40 or so disused stations on London's Underground, including both a wealth of facts and also pictures of the stations both past and present. Thoroughly researched, this book provides a window into parts of the London Underground that have long since been forgotten."

3. Underground: How the Tube Shaped London

Underground: How the Tube Shaped London is not just about ghost stations but about the whole tube system from its earliest days until the present. I've included it here as it is in my opinion the best book summarizing the entire history of London Underground.

However be warned: "The book was excellent about the history of the Underground time-wise, politically, architecturally, and community-wise but was very poor on the mechanical side of the rolling stock, its developmental details etc. Difficult to understand how someone could write so much about a rail way and be so skimpy about what rolls on the rails!!"

Click Here To Buy: Underground: How the Tube Shaped London

Now this is the first of the books on the list I haven't personally read. However, if you're after the spookier side of the tube this is probably the book for you.

Sample review: "I have to admit I purchased this book not expecting much as I have been a bit disappointed with previous books on hauntings that I have picked up. I found this book to be exactly what I was after; A solid coverage of hauntings on the London Underground without going overboard with unnecessary details."

Another one I haven't personally read but given that it gets 4.5 out of 5 stars it might be worth a look if you've read the other books above.

Review: "Excellent book with some excellent pictures and as a Londoner and a transport and London enthusiast it was great to find out some little details about which I've never been able to find out elsewhere. The only (slight!) drawback is the size and weight of the book!"

Finally if you just want some quick facts about the tube this may be the book for you. Again I have not personally read this one (even I have my limit) but the reviews look good.

Sample Review: "It works as a basic facts book for people wanting to get a sense of the history of the system, but no more than that. Its small size makes it handy for reading on trains, even those underground trains that were the book's inspiration, though of course you would have difficulty reading it during the rush hour with everybody fighting for space."

Now I'm sure I've left off many wonderful books dealing with the lost, missing and abandoned side of the Tube. So let me know what I've missed in the comment section below:

END_OF_DOCUMENT_TOKEN_TO_BE_REPLACED

Geoff Marshall returns to show you the secrets of the Central Line. For example do you know which station is the least used on the entire network? How about where you can find a Grade II listed bus shelter? Or a clock made up entirely of roundels? If you're a tube nerd like myself I'm sure you'll want to watch.

As a bonus you'll learn a whole bunch of facts about escalators.

Finally, be sure to watch out for the secret echo room at Tottenham Court Road station. Last month Geoff did a very secret tube tour and showed it to me and others on tour. While he claims the sound effects don't come across in the video, most of us on the tour thought this was one the highlights.

The only solution is for you to go experience it for yourself.

You can watch other videos in this series here: 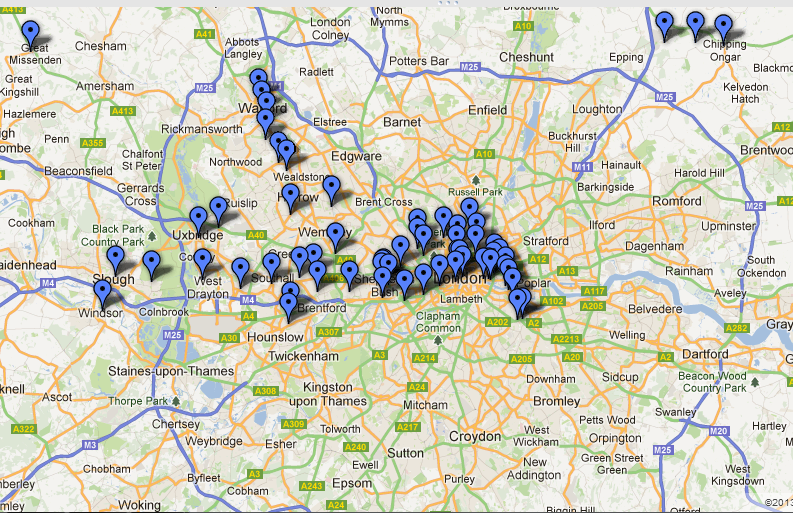 Want to know where all of London's disused/ghost Tube stations are located? Well just use the map above.

Now I wish I could take credit for it, but that honour goes to Dylan Maryk. He's managed to scrape Wikipedia to give a location for every single station opened as part of the Underground but that is no longer in use.

For a full size version visit the site: http://www.dylanmaryk.com/stations/

Geoff Marshall's at it again with more secrets of the Underground, this time looking at the District Line. Want to know where you can find a swastika on the Tube? Where you can find a 1932 (pre-Beck) map? Where you can see two fake houses in one the most expensive areas of London? Go under a river at platform level? Or which station has two names?

END_OF_DOCUMENT_TOKEN_TO_BE_REPLACED Who doesn't love the tube map? Yet as you no doubt already know the Harry Beck style map we use today, severely distorts geography to make it easier to read. This was a vast improved over previous designs (one of which you can still see just outside Temple station) in terms of readability.

However, when you're walking the tube above ground you want something a little more accurate. The map above courtesy of the new Google Maps shows just how far stations like Amersham, Chesham & Epping are from central London. Gives a whole new perceptive to just how massive this whole walking project has been to date, and how much further I still have to go.

While this is by no means the first time the modern Tube Map has been given the geographically accurate treatment, this is the only one I know of that not only includes the Underground but also the DLR, Overground and Tramlink as well.

Edit: As several people have pointed out to me on Twitter there are a few errors in the map. See if you can find them.

Given that SUBCITY starts at Queen's Park (on the Bakerloo Line) I thought now would be a good time to post it. It features lot of great Black & White sequences at various famous London stations such Baker Street, Liverpool Street, Waterloo, King's Cross and Farringdon among others. Watch for several good lingering and timelapse shots.