Today's TimelapseLondon.co.uk timelapse video features Tower Bridge as seen from Butler's Wharf at sunset. Taken using a Canon 5D MK I. Not quite as impressive a this timelpase video taken by my friend Nick Smith using the Canon 5D Mark II.

This week I thought I'd feature TimelapseLondon.co.uk's series of timelapse videos of London. The first one was taken from Tower Bridge at sunset last year - fairly obvious as the Shard isn't finished yet. Taken using a Canon 5D MK I. A photo I found via Reddit user stephhhhh. No prize for guessing where this is. Sort of neat two see two groups of Olympic rings on the Thames.

What better choice for a Sunday afternoon than a video called Slow Sunday. As the name suggests it shows London slowed down - specifically the areas around City Hall and the South side of Tower Bridge. It was created by Drew McFayden as an experiment using a Canon 600D with a Canon 50mm and 18-135mm lens (I don't know what that means, but I assume it's pretty good).

I spent a few hours late Sunday afternoon taking shots. In a few hours I took 150 shots, mostly short takes lasting around 30sec -1min. some was unusable but the were some nice shots as well. It was all shot hand held without any tripod (I don't own one at the moment).

Overall, I think the video shows a lot of promise but isn't quite as polished as it could be. This may be due in part to issues he had with editing it on an old computer. However, I really enjoyed the use of Philip Glass' music as it creates a bit of a haunting feeling. I look forward to seeing what Drew comes out with next.

I really want to get the word out about this amazing video of London's architecture shot in Hyperlapse. It was shot by Mattia Bicchi and features pretty much every single iconic landmark in London. These include:

I was a little worried when I first watched the video on Youtube because it only had 550 views. However, it turns out you can also watch it on Vimeo here, where it seems to have gotten a lot more love. I really look forward to seeing what Mattia comes out with next.

The two videos show two helicopters flying though the middle of Tower Bridge. The first clip I found via this post on Reddit from user nonlinearmedia. It shows the Helicopters flying in from the West towards the East.

The second video was found via the related video feature of Youtube and shows the exact same fly though, but from the other side of Tower Bridge (facing West). From the video description it is claimed that:

The spectacular event was believed to be for the film 'The Arrival', a short film being directed by Danny Boyle, which will be shown during the opening ceremony of the London 2012 Olympic Games.

Crowds thronged both sides of the River Thames around iconic Tower Bridge as road traffic was stopped to allow the two helicopters to fly through -- not once but three times.

The only other time aircraft have flown through Tower Bridge was on 5 April 1968 when an RAF pilot, Flight Lieutenant Alan Pollock, flew his Hawker Hunter jet between the bridge towers in an unauthorised stunt.

No idea if that's true or not, but either way, I think you'll agree, two helicopters flying though Tower Bridge looks pretty cool.

What: Tower Bridge The Night After The Jubilee River Pageant Flotilla

Story: This Tower Bridge video was created by my friend Nick Smith to test his new Canon 5D Mark II. Not being a camera person I have no idea what that means, but what I can tell you is that this is an amazing video just for a 'test'. Given that he is a professional cameraman this shouldn't come as too much of a surprise, but I'm still blown away with many of the shots he gets. You can find out more about Nick's work from his website: Newsworthy Vision. 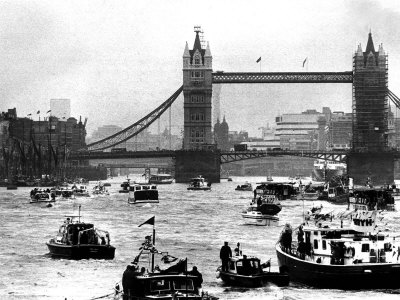 Where: Tower Bridge, City of London

Story: This picture gives a taste for what we can expect on Sunday. It was taken in 1977 for Elizabeth II's Silver Jubilee. Overall, an interesting shot of Tower Bridge with just a few of the boats that made up the flotilla.